OK, well not really...BUT...since this is the only relevant protocol to transfer files that I can find on the UNIX PC, I'm going to figure out how to get it to run on a modern linux machine.  The FTP protocol that we all know and love today, and still use, seems nowhere to be found on the UNIX PC.


Page 4-10 of the UNIX PC Terminal Emulation guide talks about it, but helps little.
Knowing how it was used with other UNIX PCs in 1985 is a start, and only a start.


See the version with settings and blunders

Now that that's done, what about communicating with a modern machine capable of being connected with the outside world?

locating the right file to configure UMODEM in ubuntu 11.10

Well that went nowhere...how about

"Files can be transferred using the UMODEM protocol, which is the same protocol as XMODEM and MODEM7 which is built into the terminal program in The Portable."

Same as XMODEM and MODEM7?  What the heck are those?

Well, if they are the same, then sending a file via XMODEM should be able to be read by UMODEM...right??

and BINGO!  We have liftoff!!!

Send file by xmodem or kermit protocol with GNU screen

Which tells us:  the best way to pass a file through xmodem is to use 'sx'. In debian this application is part of 'lrzsz' package.

Once that is complete:

Then press Ctrl-A followed by : and type:

This will send the file to ttyUSB0 over xmodem protocol

And it WORKS!
Using a USB to COM port adapter on the linux machine (thus the ttyUSB0 device), and a full handshake null modem adapter to DB25 cable, to RS232 port on the UNIX PC.
Make the call from the UNIX PC first just like shown above.  Initially, there will be no response, ie, a blank screen.

Then, open a terminal on the linux machine, and execute the commands listed above to transfer files.

In this case, I'm sending the 'gkermit' file

Then back on the UNIX PC, go through the same steps to receive a file using UMODEM.

Now, can I do this in reverse, and send a file the other way?

and then Transmit File - UMODEM on the UNIX PC instead of Receive file.

For reference, this magic program is located on the hard drive at:


I created this File Transfer Time Status Calculator
The shaded green cell is the only cell that must be edited, where you enter the file size (in number of bytes) that is being transferred using the UModem 9600 baud process

CPIO - The key to transferring a full hard drive dump over UMODEM?

NO!  Forget CPIO...use TAR!  If you want to see all about why below.  Then jump to the TAR section


Creating the CPIO file on the Xubuntu machine using these commands, where my intent is to create a cpio file containing the contents of the "install" directory at


I execute these commands:

Then I use the UMODEM procedure I demonstrate above to transfer the newly created install.cpio file from the Xubuntu machine to the UNIX PC.  The transfer processes without error or incident.


Then, on the UNIX PC, executing the

This ends up being a very short google search...

Now in this google search is this gem, discussing a somewhat related cpio issue with the 3b1.  This discsses a non-related but important topic for me...the dev/xxxx that writes VHBs to both floppies, and hard drives...if dev/rfp021 skips the header, there is one that writes to the header...hmmm...

How about dd?  Can I use that on both the Xubuntu and UNIX PC ends, and get the formats to be uniform?

Or installing tar on the UNIX PC??

I downloaded the "3b1 copy", if there is such a thing, from this site:

Then transferred it to the UNIX PC.

I had to change the rights with

At least I can type tar and get commands. 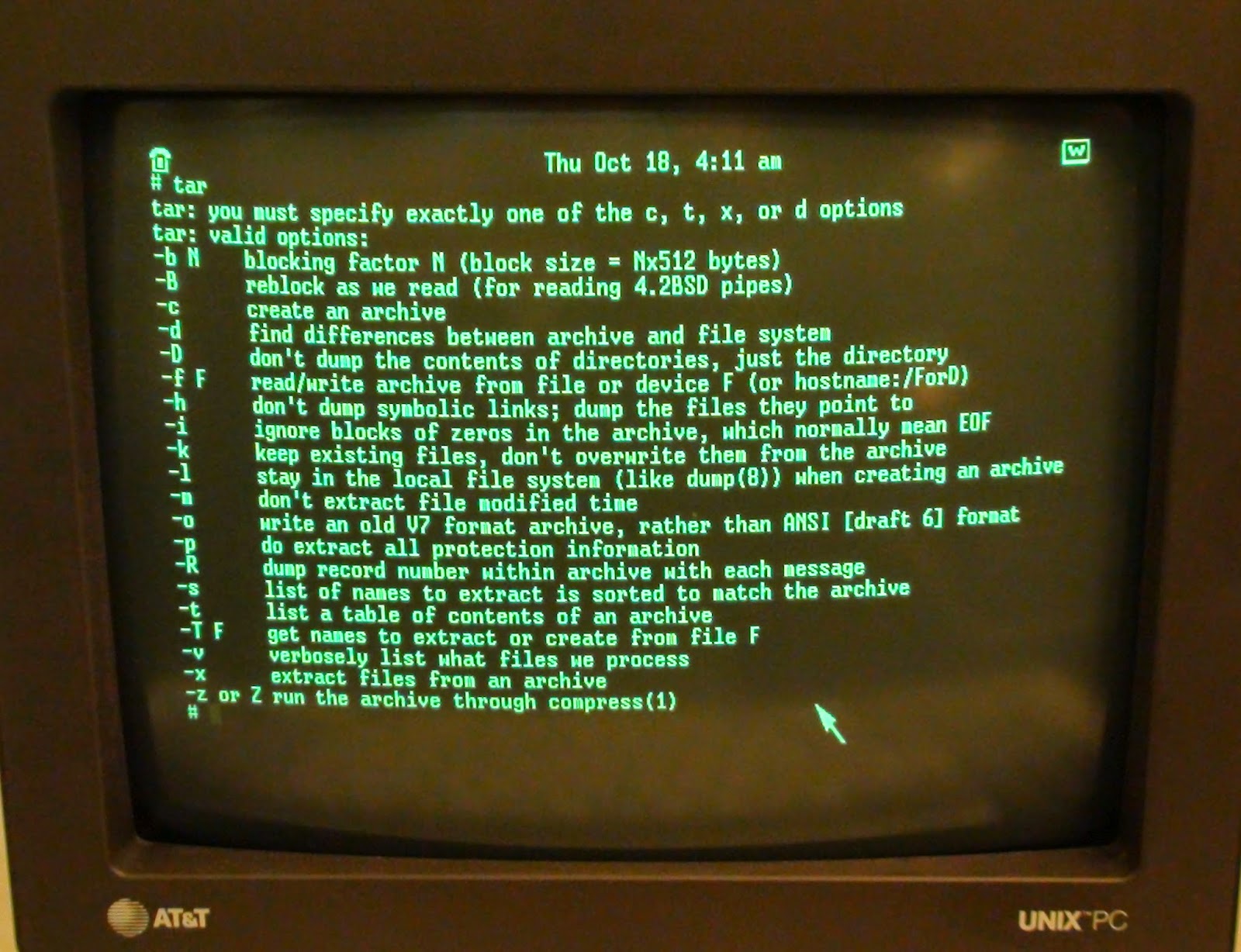 Holy cow!  Well tar is one of those things I use almost every day in the linux world.

2) tansfer the gigiantic ctix_bin.tar via umodem.  Note that I use an absolute path to tell it to write the tar archive outside the current directory.  Sometimes I use ../ctix_bin.tar to put it one directory back.  It is just problematic to write the tar file inside the directory you are tarring up.  It isn't the end of the world to do so, I think you usually just get a silly zero length tar file inside the yada.tar file or something, but I avoid it.

The other command I use all the time with tar is:

This just shows the contents of the tar file without extracting it.

AHA!!  I just peeked at your screen shot and there is a major time saver available, namely the "z" switch which compresses the archive.  So change the above commands to:

The "tz" ending just makes things clear.  Often you see .tgz files distributed.  The compression should make the tar files significantly smaller and probably save hours in the umodem transfer.

Of course test fly all this with something small first ...

I previously extracted all files from your part1.tar.gz file to /ctixhd/
install is one of the directories within, that is smaller, seemingly all text files, so I have been testing with this one.

# tar cvf /home/mightyframe/Desktop/UNIX-PC/SendFiles/install.tar
tar: Cowardly refusing to create an empty archive
Try 'tar --help' or 'tar --usage' for more information.
I'm glad that it admits that it's being Cowardly, but why does it not see any files to create?

http://bit.ly/1tC8sam
So I got the inspiration for a work around from this post/article:
https://discussions.apple.com/thread/879214?tstart=0
Specifically in:
foilpan Mar 6, 2007 3:57 PM
Re: create tarball reading file paths from stdin? in response to foilpan
the original poster omitted the find command from his testing. this works for me:

results in tarred.tar containing just the regular files in the ~/tarred directory.

is that closer to what you're looking for?

So I finally refined this to:

Then transferring this to the UNIX PC.
It seemed to have worked, as I got the result in the attached screenshot. 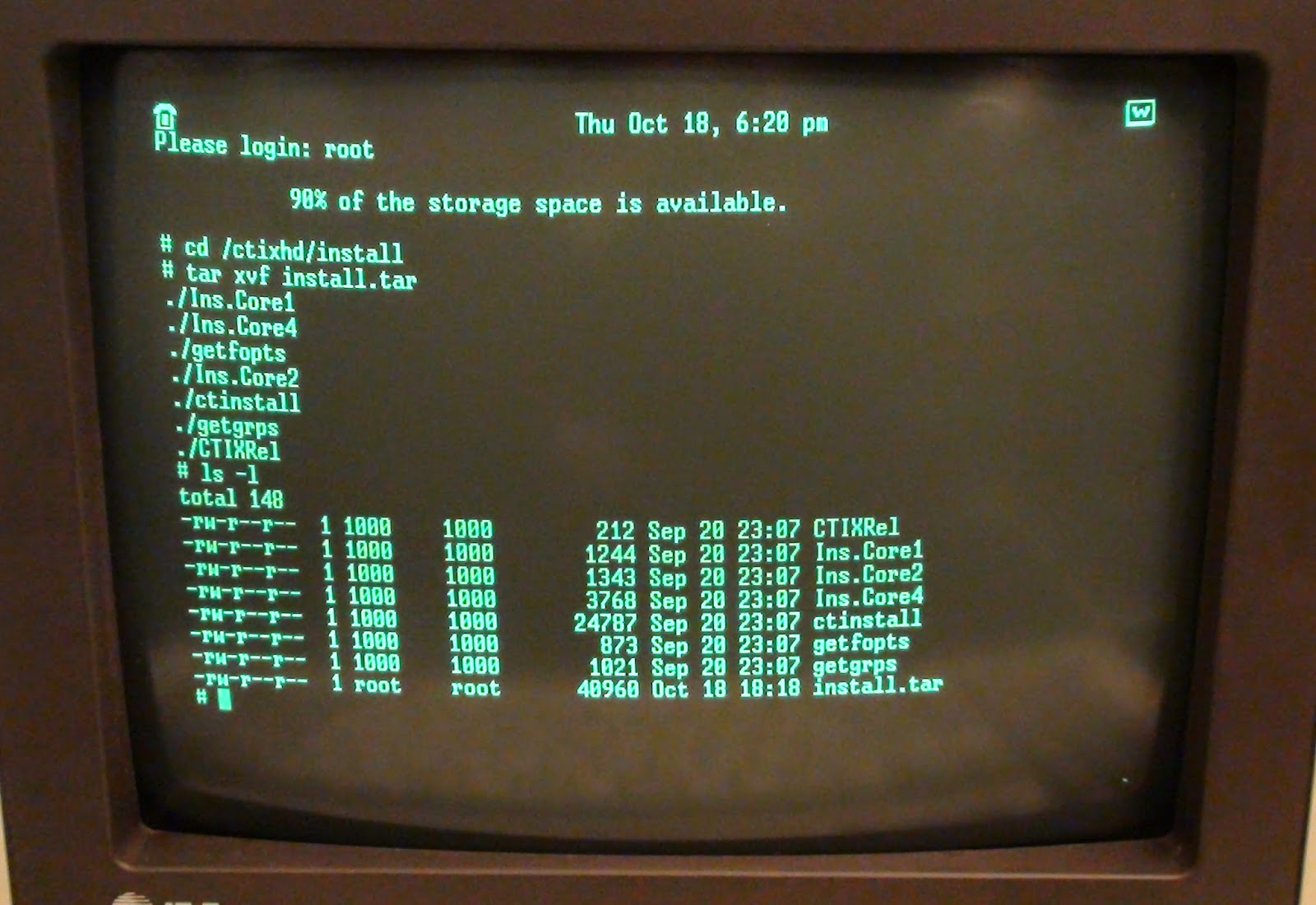 And FINALLY, if you want to create a tar file on the UNIX PC: